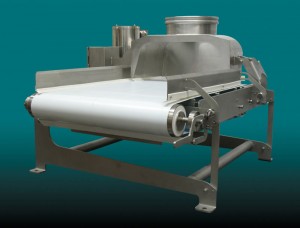 The continuous weighing, or gravimetric feeding, of a dry bulk solid is typically done by either with loss of weight feeding or continuous belt feeding. A loss of weight feeder operates by metering material out of a discrete storage bin using a weight signal feedback to integrate over time to provide a rate. Once the storage device reaches a low level, the unit must get refilled, whereas if feeds volumetrically during refill. With chunky, granular and less fluidizable products, a weigh belt feeder can be used to meter the material continuously out of the storage bin. However, since the belt is pulling from an infinite source, and the belt continuously weighs the material, there is no refill cycle in the system. The belt incorporates a load cell under a weigh zone and integrates the speed of the belt with the weight on a belt section to control the rate.

Static weighing is basically measuring material on a scale while the material is not moving. A static scale is good to either count up the weight or count down the weight. Static scales typically use strain gauge load cells to measure the weight of the material. We can use load cells on small hopper bins up to large storage silos.

A batching system can use loss of weight or gain in weight scale to measure a discrete amount of material. A system may have a weigh hopper on load cells to receive a quantity of a dry bulk material. If multiple sources feed a common weigh hopper, they must be fed it sequentially in order to measure them individually. If batching speed is a concern, an alternative is to provide a loss of weight system where each material meters out of its storage bin that is on load cells. This way, all materials can be fed simultaneously into a common hopper or processing device, such as a mixer. The advantage of a loss of weight system, besides batching speed, is the ability to measure materials that very greatly in weighment size. 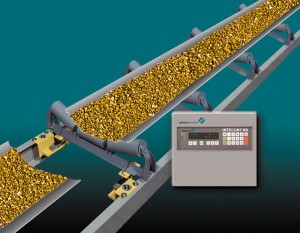 A belt scale is installed on a conveyor belt to measure the wild flow of material as it is conveyed on the conveyor. A belt scale is a load cell that is mounted to a conveyor idler or idler(s) and measures the downward force of the material. Calibrating with a known belt speed or using a speed sensor on the belt, the integrator both calculates the instantaneous rate and total. Belt scales can provide ½ to 1% accuracy’s on belts ranging from 18” to 60” wide. These units are economical solutions to inventory control in the sand, gravel, crushed rock and processing industries. 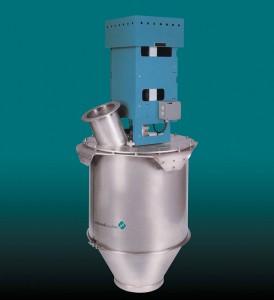 Flowmeters are designed as enclosed in-line measuring systems for continuous acquisition of flow rates and totalizing amounts. For flow rates up to 150 tons per hour, these systems can be used for instantaneous flow rate, totalization and batching systems. There are two basic types of systems available.

Measuring systems can operate according to the impact plate principle to acquire the flow rate by means of a relative force. Guided by an inlet pipe, the material stream hits an impact plate mounted on a defined angle of inclination. The load cell and weighing electronics acquire the horizontal component of the reactive force in order to determine the flow rate.